Jared Solomon has been a teacher, policy leader, and activist, who has spent his whole life working in public service to his community. As the son of two non-profit leaders, he learned the values of social justice and Tikkun Olam (repairing the world) early in life. The desire to help “repair the world” has shaped Jared’s path.

Jared serves as the Board Chair of The Intersection, a program that teaches Baltimore high school students civic leadership and college readiness skills. He has helped Intersection student leaders run campaigns to pass the Maryland Dream Act and the Firearm Safety Act. Jared also served as a founding board member of Marylanders to Prevent Gun Violence.

A proud lifelong Democrat, Jared is a 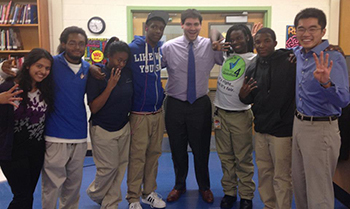 local Democratic precinct chair, and has served on the board of the District 18 Caucus and the board of the Montgomery County Young Democrats. In 2013, Jared was named by the Daily Record as one of Maryland’s Top Twenty Leaders in Their Twenties.

For the last seven years, Jared has focused on improving federal policy making – most recently as a Policy Advisor to United States Senator Bob Casey (D-PA), and previously as Vice President of Budget Policy for First Focus, a bipartisan national kids advocacy organization. As an advisor to Senator Casey, Jared helped draft legislation that improved our nation’s schools, increased access to child care and early learning opportunities, and made college more affordable for all Americans and more accessible for students with disabilities. Through his work, he fought for equal rights protections for LGBTQ individuals, worked to make our immigration system more fair and humane, and helped lead efforts to save Medicaid and the Affordable Care Act. 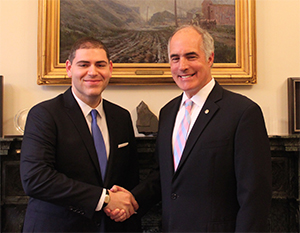 At First Focus, Jared became a go to expert on the federal budget and its impact on America’s children. He worked with the Obama Administration and Congress to make children a priority in Federal policy decisions. His work was featured in the New York Times, the Washington Post, National Journal, and other national publications.

Before focusing on Federal policy, Jared worked in education. As a member of the Chancellor of the D.C. Public Schools staff, he partnered with families, teachers, and administrators to mediate and resolve problems. He frequently collaborated with community organizations and other government agencies to improve services for students.

Jared began his career teaching social studies at Northwestern High School in Baltimore City. While teaching, he helped re-start and coach the school’s award-winning debate team. As a teacher, he saw first-hand how ill-conceived policies at the city, state, and federal level could adversely impact his students and their communities.

Jared graduated from the University of Pittsburgh and received his Master of Arts in Teaching degree from Johns Hopkins University. He grew-up outside of Philadelphia, in Montgomery County, Pennsylvania.

Jared, his wife Emily, and their rescue dog Jeeves are proud residents of Rock Creek Forest.